The 10 Most Popular Tumbled Crystals

Tumbled crystals can be popular for various reasons, the rare ones are valued by collectors, the colorful ones inspire the jewelry designers, while others are popular in the metaphysical community or among energy healers. Some people might like them for their beautiful, colorful appearance, others prefer to use them for their daily meditations. These beautiful stones work as amazing home decorations as well. Nowadays celebrities like Adele, Naomi Campbell, Victoria Beckham or Miranda Kerr are known for their passion for crystals.

We've set up a list with our most popular tumbled crystals valued for their beauty and for their exceptional properties.

When you visit our shop in Carlsbad or check out our webshop, you will find beautiful, carefully selected tumbled crystals from all around the world.

These 10 crystals are the most popular ones in our store, but you can find many other stones with amazing properties when you visit us. 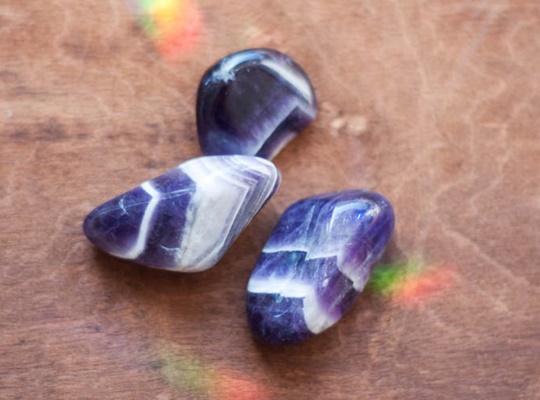 Here is the list of the 10 most popular tumbled crystals at the Village Rock Shop:

Amethyst - this striking, purple crystal is best known for occurring in large, crystal-encrusted geodes in South America and South Africa. It was considered one of the most valuable gemstones until the 18th century when there were discovered large deposits in South America. The combination of its vibrant color, amazing properties and relatively low cost for large crystals and geodes lends to its popularity. Amethyst helps us connect to our spiritual self, it is very calming, so great to work with, in stressful times.

Citrine - this amazing yellowish stone is quite rare in natural form. It is naturally formed as smoky quartz, slowly heated inside the earth. Citrine comes from Brazil, Russia, France, and Madagascar. Citrine is a powerful cleanser and regenerator. It carries the properties of self-healing and self-improvement.

Fluorite - comes in a wide range of beautiful green, purple, yellow colors and often appears in natural cubic and octahedral shapes. Fluorite is quite popular among mineral collectors due to the huge variety of radiant colors and shapes it can be found in. Fluorite is found in China, Mongolia, France, Russia, South Africa, and the United States.

Malachite - has been valued since ancient times, as a decorative stone and it is a truly amazing dark green, copper-based mineral. It is available for sale in polished forms rather than raw crystals. It is found in Africa, Mexico, Israel, and the United States. It was used as a talisman because of its protective qualities.

Rhodochrosite - this vibrant, pink to red mineral is considered Argentina's "national stone" and can be found in a few locations around the world, mostly in Argentina and South Africa. Well-formed crystals of Rhodochrosite are extremely rare and highly valued among collectors.

Green Jade - is considered in the oriental tradition the stone of good fortune, vitality, and health. Jade was featured mainly in ancient oriental art and was highly valued in ancient China being used to create the finest objects and for grave furnishings for the members of the imperial family.

Rose Quartz - which has been used in love rituals for centuries, is considered the stone that attracts and supports unconditional love, kindness, and compassion. It looks amazing as jewelry -earrings, bracelets, necklaces. It can be found in Madagascar, South-Africa, Namibia, U.S., and Brazil. Onyx - can be found in various regions including Yemen, Uruguay, Argentina, Brazil, Canada, China, India, Indonesia, Madagascar, and in the U.S. It was used for jewelry, hardstone carving and worn as an amulet due to its healing and protective properties.

Aventurine - the most common color of Aventurine is green, but it may also be orange, brown, blue, or yellow. It can be found in India, Chile, Russia, and Spain. It was used for figurine carvings and jewelry. Green Aventurine called the "gambler's stone" or, "the stone of opportunity" is known as one of the luckiest stones, attracting good luck and prosperity.

Hematite - delights us with its black, silver-gray, brown, or red colors. Hematite was popular due to its use in mourning jewelry but it was also used in art. It has grounding and balancing properties, absorbs toxic emotions, cleanses the blood, and supports circulation.