Out of Space Meteorite Gemstones

Meteorites are solid pieces of debris from out of space, coming from comets, asteroids, meteoroids, and planets, that travel through the Earth's atmosphere to land on the Earth's surface. These pieces hit an impact point, a crater is formed, the existing minerals are melted and due to various chemical reactions completely new stones are created. The meteors vary in size and typically are named after the locality in which area they are found. Meteorites have been seen as messages from the gods, representing a constant inspiration for legends. However, these mysterious stones tell an even more fascinating story for scientists: our solar system's history. 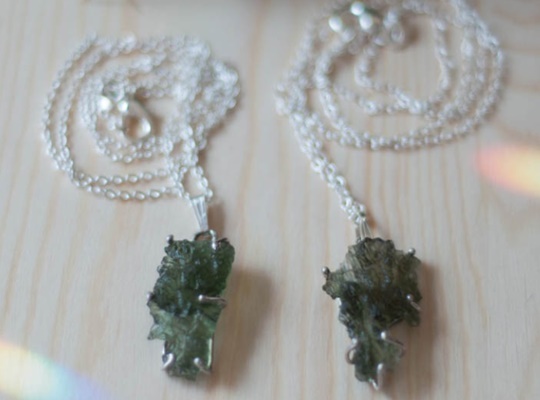 Moldavite is a Tektite created over 14 million years old when a meteorite hit Germany, forming a crater on Czech Republic's territory. Moldavite is the most popular impactite due to people's incredible experiences posted on social media. People are drawn to these rare cosmic treasures that carry the energy of the Cosmos. This makes them unique and fascinating. There are thousands of known meteorites, each one of them with specific power and benefits. Many of them are excellent tools for expanding the consciousness during meditation, for alien channeling, astral or inter-dimensional shamanic travel. Tektite is an impactite formed from the impact of a meteorite upon the Earth's surface, and it's often associated with Black Tektite. If you're looking to increase your meteorite gemstone collection, Lybian Desert Glass this rare and beautiful meteorite can be an excellent addition. This meteorite is no longer allowed to be collected, it will definitely going to run out of circulation soon. It is available for sale only in old batches.

Libyan Desert Glass is found in East Sahara, near the border between Libya and Egypt. This very pure natural silica glass is also known as Great Sand Sea Glass. It is considered to have an extraterrestrial origin that dates back to approximately 26 million years.

Meteorites that fall from the sky have fascinated people for centuries. These rare stones generate the interest of scientists, collectors, and crystal enthusiasts alike. Many meteorites are used as gems in their natural condition or cut and polished. Wire wrapping is the simplest way to wear meteorites in their raw, untouched state. Some meteorite gemstones are easy to fake; many of the specimens available on the market are imitations.

So, when you want to work with a stone with an extraterrestrial origin, buy it from a reliable source. In our shop, you'll find authentic meteorites and meteorite jewelry.

Some of these stones like Moldavite or Libyan Desert Glass are becoming rarer and rarer and will be going to run out of circulation soon. We invite you to visit our shop or check out our webshop for new meteorite stones for your collection. If you are new to the meteorite gemstone's world, let us know, we will gladly assist you.