Fossils: History And Geology In A 'Shell'

Fossils are the remnants of ancient plants and animals whose bodies were maintained in sediments on the bottom of seas, lakes, and rivers. They are typically more than 10 000 years old. A fossil can preserve a whole organism or just a part of it: bones, shells, feathers, and leaves can all become fossils.

Geologically fossils are rocks that form in five ways: preservation of original remains, silicification, molds and casts, replacement, and compression.

These are three of the most common fossils: The name "ammonite" originates from the resemblance to tightly coiled rams' horns, thus referencing the Egyptian God, Amun, who wore the horns on his head. The scientific term derives from the same name.

Ammonites were shelled cephalopods that died out many million years ago. Because they were abundant and widespread in the ancient seas, this type of fossil is found all around the world. Some ancient tribes believed in the healing properties of the "serpent stones".

By placing them in your home you can experience the benefits of various Ammonite Fossils: 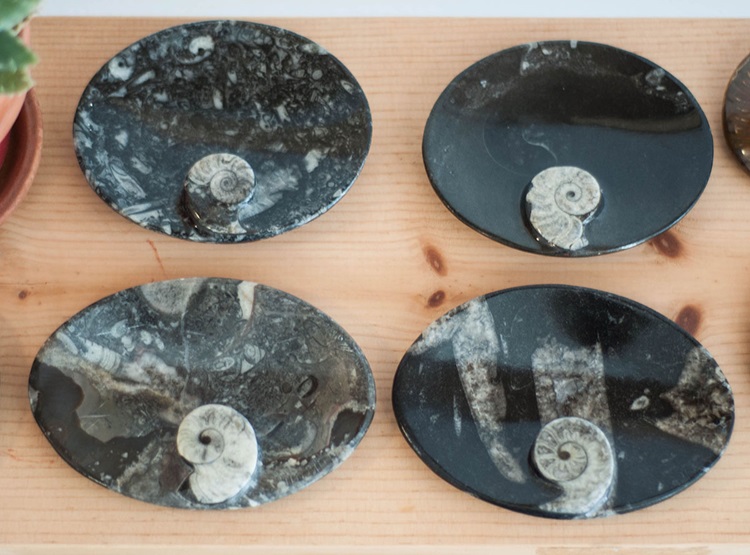 Orthoceras was an ancient cephalopod that lived million years ago. Its name means straight horn, referring to the long, straight, conical shell. They were abundant in all the Paleozoic oceans, and occur mainly in limestone sediments. Therefore in geology, limestone beds are called Orthoceras beds or nautiloid limestones. Due to the fossil's hardness, Orthoceras are good carving or sculpting material.

Orthoceras fossils accumulated energies of the primordial Earth, hence they embody evolution and transformation. Some ancient tales even suggest that Orthoceras can increase your lifespan. Also known as Pacific Cat's Eye, Shiva Shells are the Turban Snail's body cover which detaches at the end of the snail's natural life and sinks to the seabed. The Shiva Shell is an all-organic gemstone made of calcium carbonate, a snail fossil with swirls that vary in color, depending on the snail's diet.

The fossil's name derives from its similarity in form to the third eye on Shiva's forehead. The Shiva Eye Shells are "Mermaids' Money" for good luck to travelers and fishermen in folklore. Some beliefs say that it has the power to ward off the Evil Eye. Ancient healers believed Shiva Shells represented the flow of life and used them to aid the kidneys, lymph nodes, and reproductive organs. Other attributes of Shiva Shells: Petrified Wood is also named "agatized wood" or "opalized wood" and is a fossil formed in the geological process of silicification when the wood is replaced by silica, calcite, pyrite, or opal. The process begins when the wood is buried quickly by water and mineral-rich sediment, creating an airtight layer void of oxygen that halts the process of decay. The minerals in the water and sediment will seep into the wood, resulting in a fossil formed over millions of years.

Petrified Wood is formed in volcanic layers and sedimentary rocks and has a scratch resistance of 7 to 8 on the Mohs Hardness Scale.

Petrified Wood can energize the Root and Third Eye Chakras and resonates with energies like: 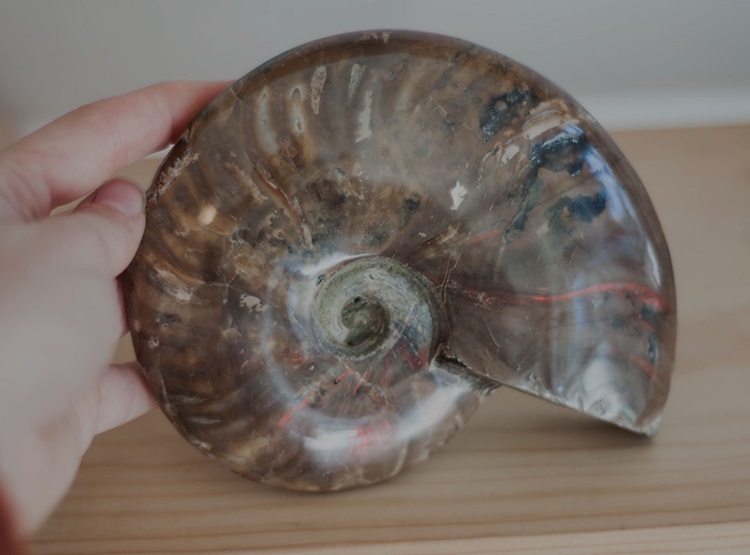 When it comes to the energy of fossils, it's all about the ancient knowledge they hold.

By meditating with fossil energy, you can connect to their ancient knowledge as a way to return to the roots.

Placing fossil stones or objects made of fossils in your living spaces will offer an abundance of life force energy. They help create a harmonious and organized atmosphere.

Some fossils make unique accessories. Wearing them helps you be in touch with their balancing and healing energies.

To harmonize and align your energy centers, place the corresponding fossil on individual chakras. Having fossils around is a potent tool to care for the subtle body, keeping it clear, aligned, and balanced.

Trying out different fossils can be a distinctive experience, given their connection to the ancient times of primordial life on Earth.

All fossils are unique, there are no two alike. Therefore, there are no similar experiences when getting in touch with a fossil. The more fossils you keep nearby, the more you will absorb their energy. Each fossil will bring different benefits, depending on its properties.