A crystal skull is a stone carved in the shape of a human or sometimes, an extraterrestrial skull that varies in size from a few inches to life-size. The most famous skulls are believed to have Mayan or Aztec origin and are made of clear quartz crystal. The ancient crystal skulls are endowed with supernatural powers such as the production of holographic images and the emission of strange sounds. Today, millions of skulls, are manufactured in a variety of sizes. Intriguing and mysterious, the crystal skulls have been of great interest to people, who are curious about their origin and purpose.

Why would anyone want to carve a skull out of a crystal? There are many who believe that the famous crystal skulls, discovered in South America were crafted for a special purpose and are the channels of ancient knowledge regarding the history of humanity and civilization. Are these skulls really the keepers of human wisdom and hold powerful knowledge? Whoever created these mysterious crystal skulls and for whatever purpose, has left an enormous question behind. 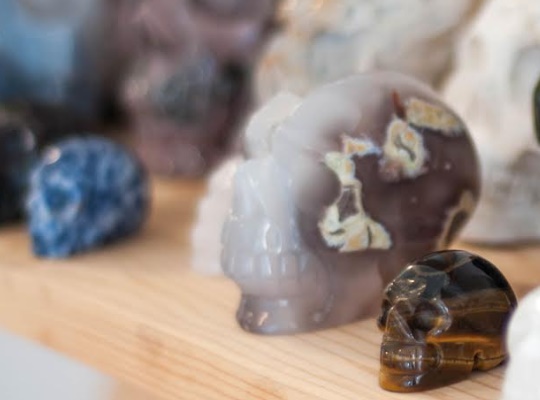 Most of the skulls available on the market are made by artisans from a single piece of crystal or stone. Current workers of stone use modern equipment to cut and shape the stone into the specific shape of a skull. The ancient skulls have many myths and legends told about them, and these primarily come from various South American tribes. The energy of each crystal changes by being carved into a specific shape - cube, pyramid, sphere, heart, or skull. The skull shape came to the attention of the world when ancient skulls were discovered and shown in many places in the world. Many skulls are made from clear quartz crystal. There are a large number of skulls created from other stones including, Amethyst, Smokey Quartz Crystal, Rose Quartz, Rhodonite, Moss Agate. It does not matter what scientists believe of the 13 ancient crystal skull's origin, the modern crystal skulls carved with advanced technology remain ever-fascinating, beautiful works of art. There are ideal gifts for dads interested in archeology, history, and the mysteries of our Planet. These skulls are cool gifts for cool dads.

Many energy healers consider that crystal skulls can be used as tools to aid cleansing, healing, and balancing. If you want to work with crystal skulls and benefit from their healing energy, use them as part of a crystal grid.

When you create a crystal skull grid, the effects can be really strong. You can make a grid entirely of quartz crystal skulls or combine the various stones together. Place a larger Clear Quartz skull in the center of the grid to focus the energy of the smaller skulls. Crystal skulls are believed to have a special energy that has a powerful effect on spiritual growth. Use crystal skulls during meditation and other spiritual techniques to enjoy its properties.

If your father likes to meditate or he is a practitioner of other spiritual methods, surprise him with one or more crystal skulls on Father's Day. If your father already owns crystal skulls, you can complement his collection with extra ones created from special stones.

Visit our shop to choose from a wide selection of large skulls for your father's collection: